Mike and Aled interviewed by Alan Daulby about creating …and Little Ones too! app and the story behind it.

Recording includes the introduction made earlier in the show.

…and Little Ones too! is an App Store experiment. There’s no way of knowing if something will sell or won’t until I you try to sell it. I’ve created several apps already so that I could learn how to do everything properly (learning Objective-C, how to build an app, etc) so that I didn’t make any (or many) mistakes with this project. Before I started the Little Ones project I understood the risks and I invested my time and money to run and complete the experiment. What I want to know is… can I make an honest living from building my own apps?

A ‘Lite’ version of the app. I’m hoping to release a totally Free version of the app that includes 6 of the 34 verses. 100% fully functional for 6 verses exactly as they are in the Paid apps (iPhone and iPad). In a nice way, once you finish reading or playing the game there will be an “Upgrade” screen where there will be an option to continue using the free app or to upgrade to the Paid version – this will be a link to the App Store to purchase the full version from there. Not an in-app purchase.

The experiment will be to see if giving away a portion of the story with the full functionality of the main app will help people make the decision to upgrade.

As it stands you can only see static ‘screenshot’ pictures or watch the app video on the website. I’m not sure this is enough. It is for some people but it might not be for others.

I hope that by being able to experience the quality of the app and a free portion of the story it will get more people to buy the full app.

Once I’ve finished developing this new version I hope Apple will approve it (wish me luck!) so that I can complete my experiment. Check back for updates.

The publicity surrounding …and Little Ones too! has been pretty amazing. People have been very supportive of the story and the app itself. We now have a Universal (iPad & iPhone) and an stand-alone (iPhone only) version available at two different price points.

Glyndwr University have been extremely supportive. As an ex-student I’m extremely grateful for their support. See case study video, press release, and meet the student page. Hopefully lots of students will sign up to do App Design or other Computing courses… it really is a great University.

The #fourlittletesters have been extremely supportive. Review and subsequent Apple feature.

Lots of people have Liked and Retweeted on social networks.

I’ve had a radio interview on Calon FM and I’ve been interviewed with my Dad by BBC Radio Wales (broadcast on Thursday 22 August).

Newspapers have also picked up the press release. These include the Daily Post, Wrexham Leader and the Free Press.

Finally, Apple UK have tried out the apps and for the two different versions have featured them in the “New” list in the Book category. It’s the smallest feature Apple do but it’s still a great honour to have your app recognised. There are hundreds of other apps that never get any recognition at all.

I’m very grateful to everyone for your support. 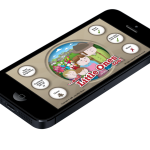 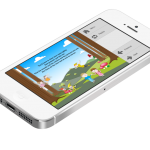 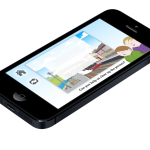 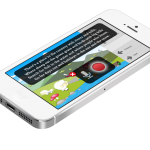 I recently updated the iPad version of …and Little Ones too! to version 1.1 with the addition of the user voice recording feature.

Honey, I shrunk the Little Ones…

I’ve also been hard at work developing an iPhone version of the app. It’s been completely re-engineered from the ground up. Almost no code is shared with the iPad version and none of the graphics are scaled down in-device… it’s a completely designed-for-iPhone memory efficient pocket version of the app.

It’s been developed to work on iOS 5 and above. It works perfectly on the iPhone 3GS, iPod touch 4G, iPhone 4, 4S, the iPhone 5 and iPod touch 5G. It’s also been thuroughly tested on iOS 5, 6 and iOS 7b5. The iPhone/iPod touch version of the app will be 100% iOS 7 ready on launch day. We won’t be dropping iOS 5 support.

Subject to Apple approving the iPhone version it will be released by September (hopefully).

In the meantime, please enjoy the sneak peek screenshots in the gallery. It’s a truly beautiful app and super easy to use. I can’t wait until it’s available for download.

The Little Ones just got littler.

This morning I visited the Calon FM radio studio situated on Wrexham’s Glyndŵr University campus. I had been invited to be interviewed about my new children’s storybook app by four young radio journalists who present the weekly Chatty Children show.

I really enjoyed the experience. The children were very professional. They had all done their research by using the app earlier in the week and they had prepared questions for me to answer – none of which I had any clue about beforehand.

I’ve never been interviewed on the radio before and coming up with an answer to a question in a flash is harder than it seems but it’s fun too.

Amazingly, by the time I got back to the office and had emailed in the app intro music, a few narrated verses from the app and the photo below I had an email from Calon FM with an edited copy of the interview. Quick work! 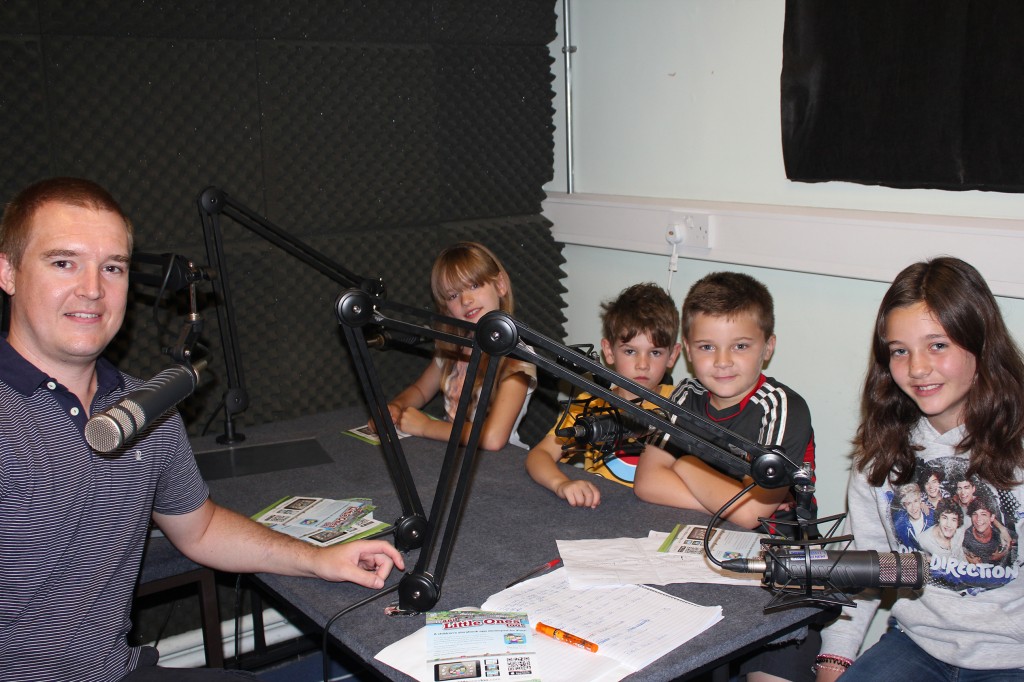 You can listen to the interview on Calon FM tomorrow (Thursday 1st August 2013 at 12pm) and on their website shortly afterwards. I will add a link to the online version once it’s available.

Thank you to everyone who has helped spread the word about the app. Here are the press cuttings. Seen a story we’ve not found yet? Please Tweet me a link.

#fourlittletesters – Review: …and Little Ones too!
We had the absolute pleasure of testing this wonderful children’s story by @littleonestoo Rated 4/5

Graduate creates app based on nursery rhyme written by his Dad – Glyndwr University. 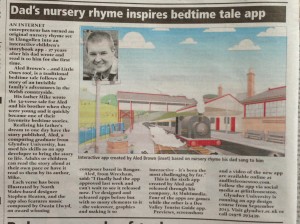 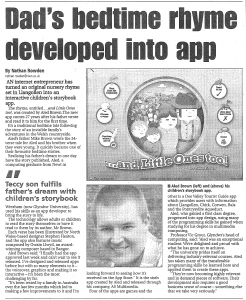 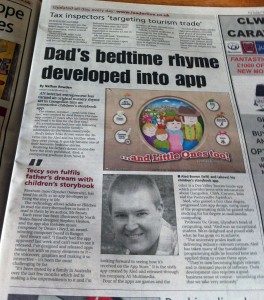 First of all …and Little Ones too! was a lot of hard work. I mean a lot. A great deal of time has been spent creating it for the iPad. There is only so much spare time one person can have and I’ve spent all of mine on this project. (See previous post)

Why iPad first? That’s easy. You’ve got to start somewhere and you can’t do everything all at once. I’ve been working towards being able to release this app for 18 months learning more and more Objective-C (the native programming language used on Apple’s devices) and the iOS SDK frameworks. I’ve created 5 other iOS apps along the way and each has been a step up from the previous one in one way or another. I love making iOS apps.

Will you make an Android version? Yes. Definitely. I’d love to. But it will only happen if the iPad version is successful. If it is there will be an Android version. Successful means that the app must recoup the actual monetary cost spent to develop it and none of my own time counts as a cost (i.e. even if it does achieve that, I still won’t have made a penny).

I’ve not counted equipment costs (Desktop + Laptop Mac and 3 different iPad testing devices) or software license costs. Those are being supported by my web developer day-job.

I don’t have a tablet computer – will there be a printed version? Again, this depends. If the app makes any profit at all that profit will be put straight back into printing and publishing costs. I won’t count my time spent on producing a book version as a cost. The cost will come from actually printing it, getting an ISBN number and all the other expenses associated with getting something published in the real world.

How can I help you? Thanks for asking. All I ask is that you share a link to the iTunes app page, like the Facebook page or Tweet something about the app for iPad to your friends. If enough people get to know about the app and a small percentage of those people have an iPad and buy a copy we may just make the iOS app enough of a success to be able to continue working on alternative formats.

Best wishes and thanks for reading, Aled

Marketing …and Little Ones too! is progressing steadily. I’m getting positive feedback from lots of people who are looking forward to the release. Update: It’s out – App Store link.

Here’s a sneak peek at a leaflet design for the app. I like to leave leaflets or app URL cards with people I talk to. People don’t generally immediately go to a website when you’re talking to them but if they can take away an attractive leaflet or a card they might remember to have a look later or pass it onto a friend. 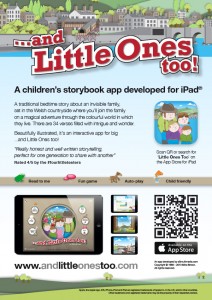 I didn’t know this happened if you scanned a QR code for an iPad only app on an iPhone (let alone one that isn’t available yet). I thought it was beautifully stunning and elegant. Tapping “Learn more about this app” takes you to the app website. A delightful user experience. This is my first iPad only app so I guess I had no reason to know. Update: App Store link. 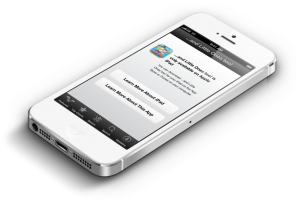 What happens on an iPad you ask? It errors out and that saddens me. Apple should do a landing screen like this for unavailable apps on the device the app works on. A stupid error message is a bad user experience.

What happens on an Android tablet and phone? I leave no stone unturned. It takes you to the App preview web page or because the app isn’t out yet asks you to download iTunes on your computer. It doesn’t ask you to buy an iPad or iPhone or mock your choice of device.

What, Aled has Androids? Of course I do. I wouldn’t know which was the best platform to work on if I didn’t try the others and I wouldn’t be testing websites properly if I didn’t see them working on Android devices.

One of the most fun-to-build features of …and Little Ones too! was the Child Lock feature. I believe it’s the small but crafted and delightful details that really count. So instead of asking parents to enter the answer to a … Continue reading →

I'm an independent web/app developer from North Wales. I run my own business called A5 Multimedia Ltd.

I love Objective-C and the iOS SDK.

My friends tell me I'm pretty good at App Design and my apps have been featured by Apple on the App Store several times.